From Oikonomia to Political Economy / by Germano Maifreda 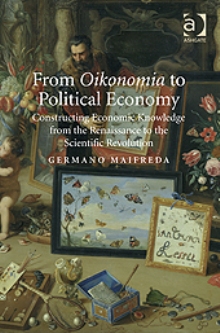 Renaissance Europe witnessed a surge of interest in science, with new ideas and theories being applied to all aspects of life. Whilst the study of this Scientific Revolution has dramatically shifted our appreciation of many facets of the early-modern world, remarkably little attention has been paid to its influence upon one key area; that of economics. Through an interrogation of the relationship between economic and scientific developments in sixteenth, and seventeenth century Western Europe, this book demonstrates how a new economic epistemology appeared that was to have profound consequences both at the time, and for subsequent generations.

Links
Robert B. Ekelund's Review
Table of Contents
Back to top